The word "safari" comes from the Swahili language and stands for a journey of any kind. In recent years, the term safari changed to for "tourism" in national parks, where you can see animals in the wild and take pictures. I had the pleasure of visiting the northern and eastern national parks, so far. Below you will find some information about the safaris close to Chengeni Beach Resort as well as information about selected national parks. Detailed information on listed safaris can be found in our contract partners and recommended sites. For local activities please contact me directly.


Safaris to destinations in the vicinity of Chengeni Beach Resort

Saadani National Park, near the village of Saadani, is Tanzania's only national park on the coast. The 1100 km² park protects unique coastal savanna, mangrove and primary coastal forests along the Wami River, as well as important turtle breeding grounds. Of course, the abundance of wild animals in the Sadaani NP is not comparable to the large parks, but the Rivertour through the park, as a day trip, is highly recommended! In addition to crocodiles and hippos and a variety of birds that are a guarantee on a trip to this park, you are also likely to see elephants, zebras, antelope wildebeest and giraffes. You have to be a little bit luckier for lions and especially for leopards - witch are rare to see in whole Tanzania.

Twentyfive kilometers north of Chengeni Beach lies the small traditional town of Pangani. Far less popular than the offshore Zanzibar, Pangani's original beaches are the opposite of mass tourism. For centuries the Muslim-influenced city was the hub of ivory and slave trade. The river Pangani stretches from the Indian Ocean far into the country just shortly before Arusha. The Pangani River Tour is especially for bird, nature and crocodile lovers!

Immediately behind Chengeni Beach Resort is an incredibly large area that the local Masai (in this region called Magnati) call their own. Here you can meet the primitive people in their usual environment, as thousands of years ago. These Magnati provide us with fresh cow's milk every day. Very nice, warm and funny people.             Approximately 6km north of the Chengeni Beach Resort are "quite modern Maasai", which in contrast to the Magnati, have dwellings. These warm Christians celebrate every Sunday in the church and looking forward to every visitor! Also very interesting and amusing.

I own 150ccm enduro motorcycles (for larger groups you can borrow them, at fair prices) with which you can explore the backland. Here you are about to experiance gravel roads, trails and compass-riding! Roads are not found within 25km. This is by far best way to explore the beautiful scenery around the Chengeni Beach Resort.

Approximately 40km in front of the resort there is a sand dune. It looks idyllic - almost unreal. Here is a great abundance of fish and corals to be found. We are happy to organize these trips for you.

Our partners have a very luxurious boat that is perfect for deep sea fishing. We are happy to organize a trip for you.

Whether for lunch in Zanzibar or for a quick trip to the turquoise blue beaches of Kenwa or Nungwi from Chengeni Beach, there are several ways to get to Zanzibar. Whether adventurous with the Dao (sailboat without engine with all sorts of goods together in eight hours or by speedboat in half an hour and everything in between, we can organize it for you.

Safaris to the big parks in the north.

Ngorongoro is a burglar crater in Tanzania on the edge of the Serengeti, 180km west of Arusha. It originated when a volcanic mountain collapsed at this point. The crater floor is located at about 1700 meters above sea level and the side walls are between 400 and 600 meters high, so that the crater edge is at about 2300 meters. The diameter of the crater is between 17 and 21 kilometers. In total, the crater has an area of ​​26,400 hectares. Approximately 25,000 large mammals populate the crater, including Africa's highest predator density. The number of zebras, buffaloes, wildebeests, eland antelopes and Grant and Thomson gazelles is particularly large. They are hunted by lions, spotted hyenas and leopards. In addition, there are elephants in the crater and, unusually in this area, hippos. There are still between ten and 15 copies of the threatened black rhinos. The large animal migrations in the Serengeti also lead through the Ngorongoro Crater. 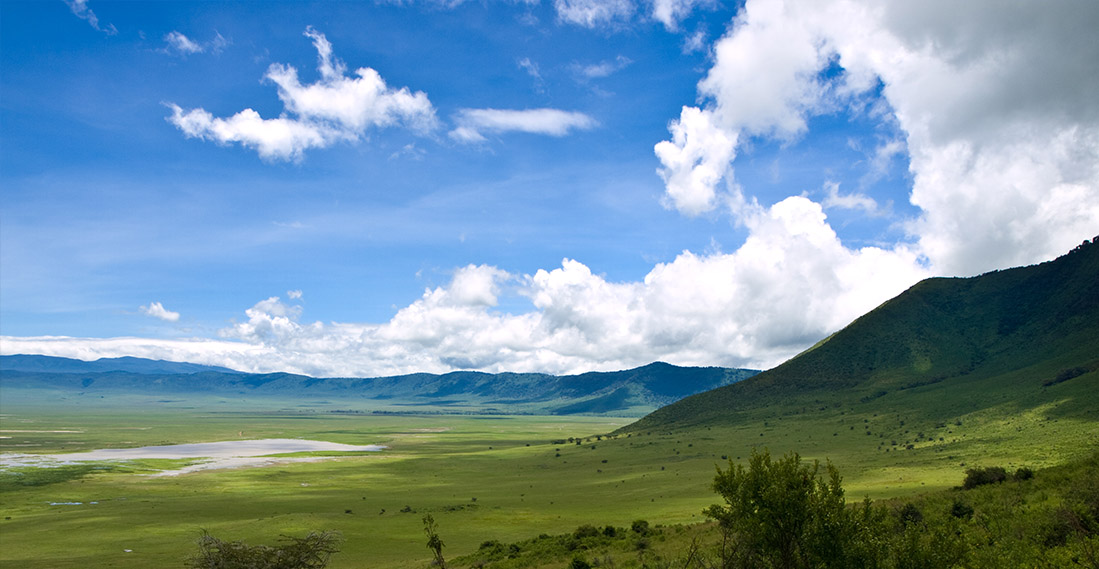 The Serengeti is a low-tree savanna that stretches from northern Tanzania, east of Lake Victoria, to southern Kenya, covering an area of ​​about 30,000 square kilometers. The word Serengeti is derived from the Masai language of the term "siringitu" and means "the endless land" or "the endless plain". Extensive, flat grassy steppes to the south face slightly hilly, slightly forested plains to the north. The central savannah is almost treeless, in the southeast rises the volcanic Ngorongoro protected area (World Natural Heritage since 1979). The highest mountains are about 1850 meters above sea level, lower parts of the savanna reach down to about 920 meters. The area of ​​the Serengeti surrounds the Serengeti National Park, which with its 14,763 square kilometers is one of the largest and certainly the most famous national parks in the world and since 1981 part of the World Natural Heritage of UNESCO and the 23,051 km ² biosphere reserve. 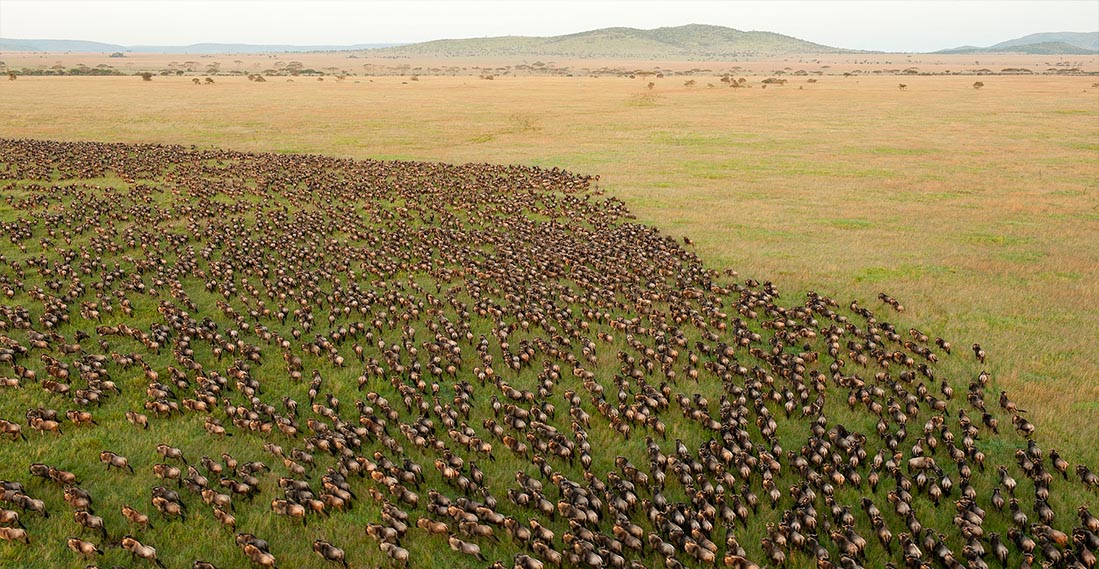 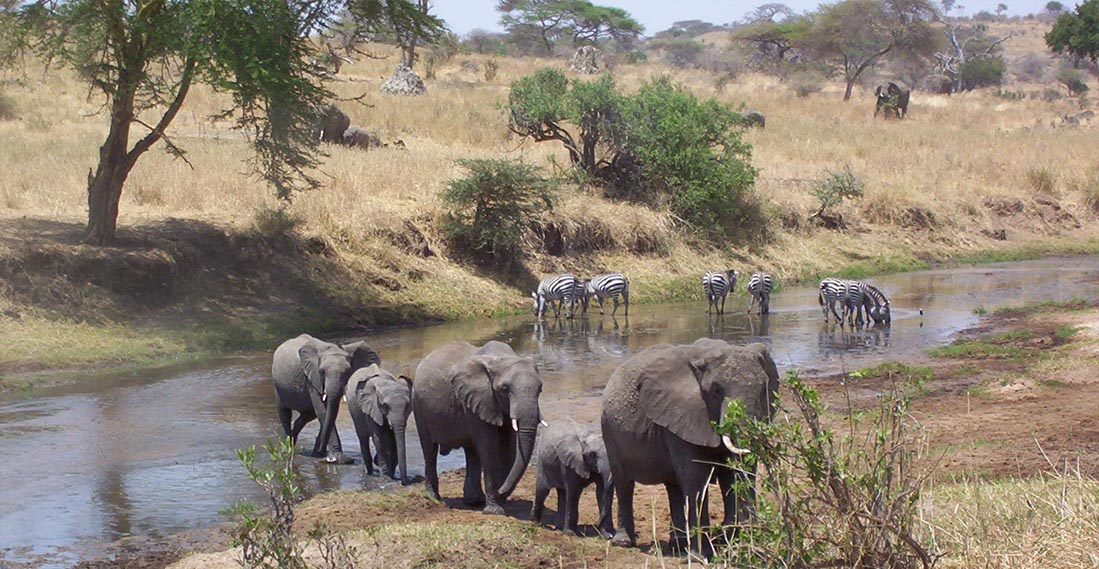 Lake Manyara National Park is a national park in northern Tanzania. In the west, the park is bordered by high cliffs of the Great Rift Valley, the Manyara Lake occupies the eastern part. In the south of the park are the hot springs Maji Moto. The Lake Manyara National Park is located about 120 km west of the capital Arusha in the same region, in the immediate vicinity of the place Mto wa Mbu. The park is located at 960 to 1828 m above sea level. It covers an area of ​​330 km ², of which about 220 km ² are covered by Lake Manyara. Lake Manyara National Park has possibly the largest biomass density (weight per area) in mammals worldwide. Of these, the elephants with 6 copies per square kilometer and buffaloes with a density of 18 per km ² have the largest share. There are still black rhinos in the park, but not in the large numbers for which the Lake Manyara National Park was known. Other mammalian species include zebras, hippos, giraffes, diademed cats, anubis baboons and other monkeys, leopards, zebra gulls and various antelope species, including impala, bushbuck, kirk dikdik, klipspringer and blue wildebeest. During the dry season, large herds of wildebeest from the northern Mto wa Mbu Game Controlled Area wander into Lake Manyara National Park for a short time. Rarely are lions also to be seen. In Lake Manyara National Park, the largest known elephant density can be found. In 1977 there were still 453, in 1981 an estimated 485 and in 1987 about 180 elephants. In the park there are over 400 species a large variety and number of birds, for example hornbills. Duckbirds are sometimes found breeding. Dwarf flamingos can occur in thousands, pink flamingos in smaller numbers. There are white pelicans, black-headed storks and cormorants, as well as at least 44 species of day-active birds of prey, including palm vultures and Hieraaetus ayresii. The formerly common Charadrius venustus is rarely seen today. Among the numerous reptiles is the Nile monitor, which is often seen on rivers, and some cobra species. 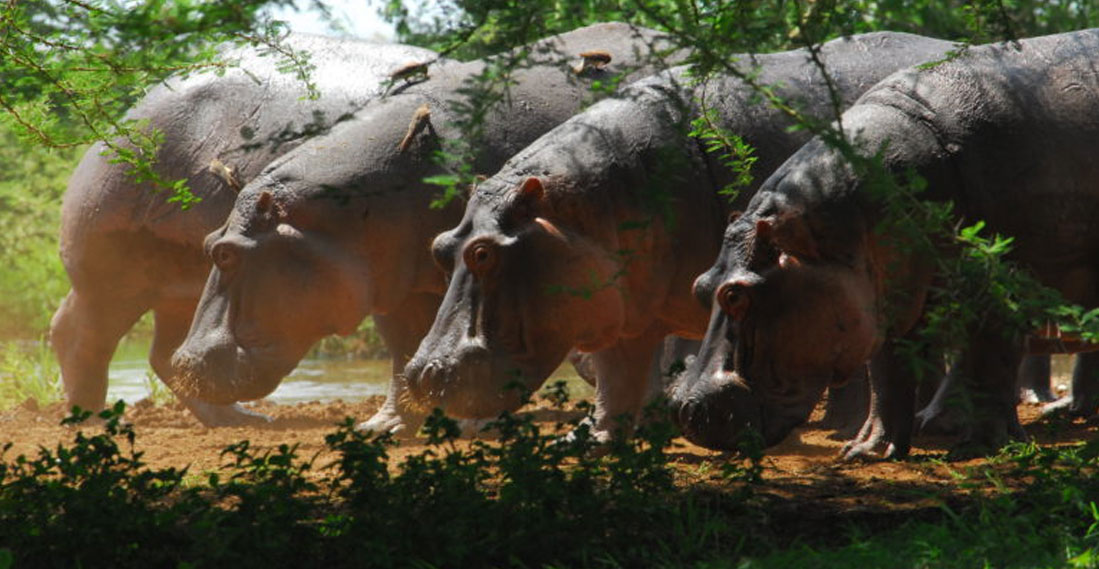